Who knew teaching students in the virtual environment would be so difficult?  The struggles range from getting students to turn on their cameras to trying to get them working in teams all while speaking to icons that represent humans but have no human qualities. In a continued effort to build community and work on teamwork in my virtual classroom, I craved an activity that would draw every learner in at some level.  The activity needed to be a low floor, high ceiling task that required discourse and reliance on teamwork. In addition, it needed to work in a virtual environment.

As all good teachers do, we have an arsenal of “go-to activities” that are timeless classics. These classics engage students like no others and are proven winners, but the real question was, would these classics work in the virtual classroom?  Since I am not one to shy away from a challenge, I decided to try to build culture and team work by recreating an interactive version of the 4 Fours activity in Google Slides that could be used in a virtual environment.

Students were placed in teams of four and put into breakout rooms.  Each team had one Google slideshow to work on and edit.  Students were instructed to put their names on the team roster in a different color. Whenever they made a contribution to the activity, they would use their color on the document. This allowed me to see who was contributing to the team activity and to encourage those that did not have anything on the document to find success.

Below are some of the observations made during this activity. 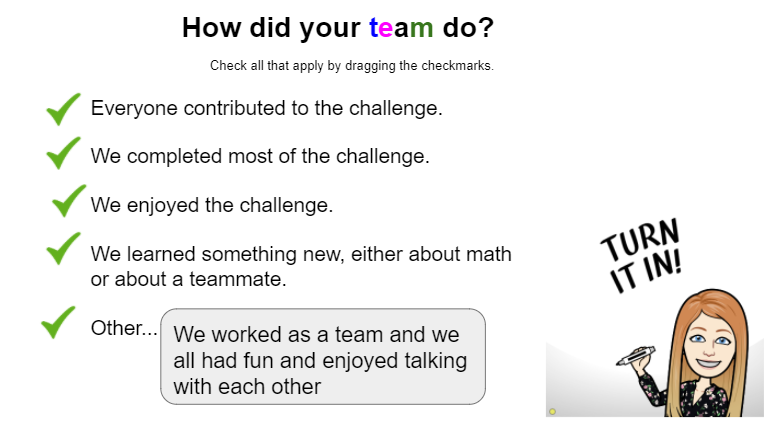 At the end of the challenge, all teams had to rate how they did, and they could leave me any note that they wished to.  A team example is shown at the right. This made my day…I guess my mission was accomplished with this lesson!!

This activity continues to prove to be one of the most valuable ones that I have to build teamwork, class culture, and to engage students in mathematics. Just like Green Eggs and Ham is a classic from Dr. Suess, 4 Fours is a timeless classic for all teachers. In the words of Sam I am, I can honestly say you can do 4 Fours in a classroom. You can do it on a Zoom. You can do it in a Google meet and know that you will not miss a beat. The kids will love it whether you do it here or there; try it and see how your class fares!

Did She Just Say, “Snowball fight?”

Did I catch your attention like I caught my students’ curiosity?  So what does a snowball fight have to do with math?  Let’s just say the idea…

How I Magnified Students’ Voices by Quieting My Teacher Voice

In one form or another, I have been working on student participation as part of my action research investigation with my CPM TRC (Teacher Research Corps) teams…

Even before remote learning, I had been considering different ways of assessing students in my Integrated Math 2 and Introduction to Statistics courses. I felt (and students…